Naracoorte is my home now
Picture: The Naracoorte Herald
As published in Brand South Australia.
Written by Melissa Keogh.

Hafeezullah Haidari had fled persecution in Pakistan when he came to Australia in 2013 with only $34 to his name.

Forced to leave behind his wife and four children, Hafeezullah, a member of Pakistan’s ethnic Hazara minority, sought asylum in Australia, 10,000km from home.

He settled in the small Limestone Coast town of Naracoorte and built a life “from nothing”, opening an Indian restaurant and harnessing a desire give back to the community that took him in.

“In my country it’s not safe for Hazara men,” Hafeezullah says.

“That’s why I came to Australia. It’s the best country in the world, and it’s a safe place.

“I am from nothing. No money, no nothing. I decided that I wanted to open a restaurant in the town.”

After settling in Australia for two years, Hafeezullah opened Pearl Indian Cuisine Naracoorte, and set out to give back to the community that had embraced him.

He supports Naracoorte High School and Independent Learning Centre students, who mostly speak English as a second language, to increase their employability and build their confidence.

“Many students come through and go on to get a part time job,” Hafeezullah says.

“They learn good confidence and built up their hospitality skills.”

Aside from hosting fundraising dinners, Hafeezullah provides breakfast for Naracoorte’s annual Australia Day celebrations, and is a member of the local Rotary Club.

In 2017, his story made it to TV screens across Australia when SBS World News aired a piece on his background and the restaurant.

Hafeezullah’s brother Asmat Ullah Haidari has also settled in South Australia and for the first time since 2013, Hafeezullah will travel to Iran in July to see his wife and children.

He says bringing them to Australia is too difficult due to immigration processes but he manages to stay in regular contact.

Hafeezullah is a trained chef, having worked in Pakistan and Saudi Arabia.

“His restaurant is noted for its excellence in service standards, quality of ingredients and standard of fare,” Jenny says.

“Hafeezullah Haidari is a self-made man who came to Australia with nothing but his skills and a determination to make the most of his opportunity to build a business and a life in Australia.”

It’s hard to find a bad review of his Indian-style cuisine, which he cooks from authentic recipes and fresh spices and ingredients.

“Indian (food) in Pakistan, the taste is the same – it’s a part of India and a part of Pakistan,” he says.

“Butter chicken is a top dish for Indian cuisine and it’s my favourite.

“Korma is also top of the menu. There are many choices in the restaurant, and a local wine list.” 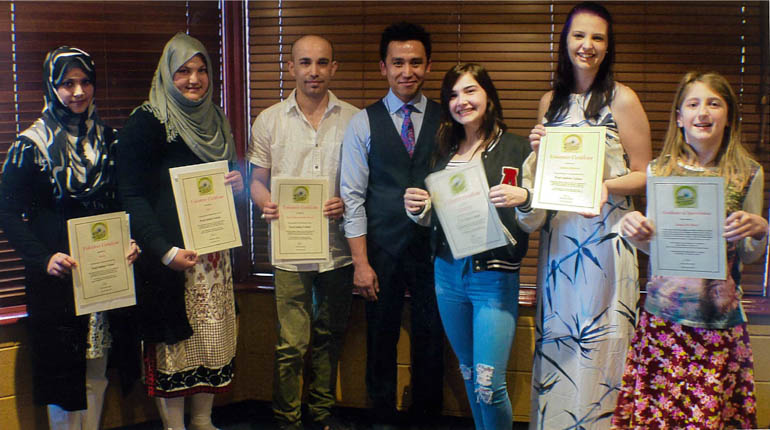